Data and water do mix, apparently. Using data and analytics can lead to great benefits in water preservation.

We’ve all heard data is the new oil a thousand times by now. Arguably though, we can all live without data, or even oil, but there’s one thing we can’t do without: Water. Preserving water and catering to water quality is a necessity, and data can help do that.

On the occasion of World Water Day, ZDNet discussed the use of data to preserve water with Gary Wong. Wong is the Global Water Industry Principal for OSIsoft, and he was recently named one of the world’s 50 most impactful leaders in Water & Water Management.

Wong started his career with Metro Vancouver, in which his role was to manage Corporate Applications for the water utility. After eight years in this role, and using OSIsoft in that capacity, when he got an offer to join OSIsoft to take the lead in building the Global Water Industry branch, he did not turn it down.

But what is the Global Water Industry exactly? During the 20th century the world population tripled, while water use for human purposes multiplied sixfold. The most obvious uses of water for people are drinking, cooking, bathing, cleaning, and — for some — watering family food plots.

This domestic water use, though crucial, is only a small part of the total. Though usage varies worldwide, industries use at least twice as much water as households, mostly for cooling in the production of electricity. Far more water, something like 70 percent of total consumption, is needed for agriculture and natural environment purposes.

Still, Wong said, the Global Water Industry focuses on utilities and domestic use of water, at least as far as OSIsoft is concerned. The reason for this evident asymmetry has to do with business models. Simply put, utilities seem to be more willing to invest in analytics to improve their efficiency. 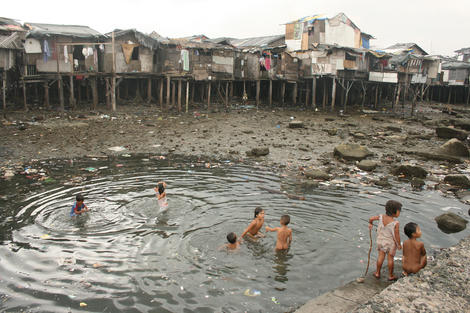 In Manila, not the entirety of the population has access to water, and there is huge amount of waste due to the old and inefficient infrastructure. Image: (Image: Cherry Wolf / Flickr)

The pressure to make better use of water will be mounting. We can hope to see this carrying over beyond utilities. But even in what is essentially a minority of overall water usage, OSIsoft claimed over 150 water and wastewater utilities rely on its PI System to manage operational data for over 250 million customers.

Success stories we discussed with Wong range from the White House Utility District in Tennesse, serving about 100.000 people, to Maynilad, the water company serving Manila, the most densely populated city in the world, with an estimated total of over 21 million people in its urban area.

White House Utility District pinpointed a leak spilling nearly 147 million gallons a year, reduced its costs by over $1 million and postponed $15 million to $20 million in upgrades. Maynilad was able to recover 640 million liters a day that otherwise would’ve been lost through leakage and reduced the cost of some repairs from $1.7 million to $1,250.

These are some pretty impressive feats, and Wong pointed out to all the benefits this could bring at scale in the metropoles of the world. The obvious question then is: How is this magic possible?

It’s simpler than you may think. Wong explained that for the most part, no new investment in infrastructure was needed. Utilities, like most industrial complexes, already have SCADA systems in place that enable them to collect vast amounts of data. But oftentimes it turns out they do not know, or care, to do anything particularly useful with that data.

“It’s not unusual that i will discuss with some utility and they will drop some numbers from their SCADA, like, we’re collecting a gadzillion data points per hour,” Wong said. “My answer to that is: Great, but what do you actually do with that?”

Unsurprisingly, it seems culture is a big part of this issue. Wong explained that utilities often operate in a non competitive environment. Wong thinks that lack of competitive pressure may not provide enough incentive for them to maximize their efficiency and develop a data-driven culture.

Getting value out of analytics for water utilities is no different than usual. It’s a mix of infrastructure, integration, and culture. (Image: OSIsoft)

But there’s also the technical part, of course. As Wong explained, the main barrier utilities have to deal with is integration. Their SCADA systems may be old, not sufficiently documented, produce idiosyncratic data formats, and not necessarily designed to work with one another.

A layer that can aggregate and offer a unified view over that disparate data is a prerequisite for utilizing it — a big part of the value OSIsoft brings. OSIsoft’s PI comes with pre-built integrations to an array of SCADA systems, and it adds operational systems such as ERPs and other data sources to the mix.

This unglamorous, but sorely needed work, is what enables analytics that lead to benefits for the utilities. As OSIsoft has been focusing on the industrial sector since its inception, it has developed and instilled domain-specific knowledge in its products. The ability to handle time series data, or provide out of the box metrics for the domain, are good examples of this.

Getting the basics in place can already bring huge benefits. But that’s not all there is to it. Wong also referred to more advanced scenarios.

For example, predictive models have been developed that enable utilities to forecast demand with an accuracy as high as 98 percent. These models utilize data collected via OSIsoft, combined with other data such as weather forecast, which are then fed to machine learning models in external applications.

Another thing that is possible based on data collected from disparate sources is automated control. Tracing leaks, or finding optimal infrastructure configuration and use, is one thing, and acting upon this is another. What if instead of generating alerts for a crew of engineers, these SCADA systems could be sent commands to self-adjust? That’s why they are there after all.

Wong said this is possible, but not something OSIsoft does. Machine learning falls under this category, as well. He did note, however, that OSIsoft works with an array of partners that offer this type of services to clients, and such scenarios have been implemented.

It seems OSIsoft has a somewhat inflexible business model itself, probably mirroring the industry it operates in to some extent. Wong added, however, that it definitely sees the value of infrastructure such as smart meters and IoT going forward, and it is already making use of it.

It takes a lot to make the most of what we usually take for granted: water. (Image: OSIsoft)

Some other areas in which data integration enables innovation is open data and citizen science. The flip side of utilities not operating in competitive environments is that they may enable innovation for others. Wong mentioned that datasets collected by utilities can be, and in some cases are, made available to third parties as open data.

This can trigger scenarios such as coordinating with other utilities, or enabling startups to offer insights into consumption patterns for consumers. More often than not, there is no clear mandate for utilities to make that data available. But, for Wong, this is part of the do-good mission of utilities, even though these assets require investment to acquire and maintain.

There are also cases in which utilities reach out to citizens to provide data. This can be as simple as a call to report anything out of the ordinary in terms of water color or taste through social media — or as advanced as utilizing citizen-made observation platforms for water quality.

One thing is certain, however: We need as much efficiency and clarity in water management as possible. Data and analytics can facilitate this to a great extent, and they can be used to achieve great benefits.